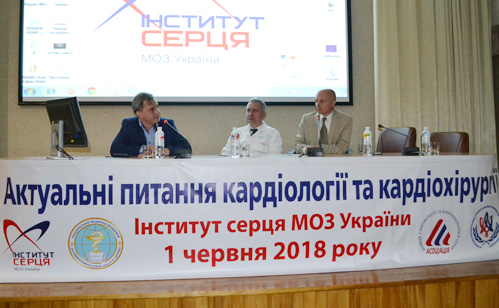 On June 1, 2018, the Fourth Annual Scientific and Practical Conference “Actual Issues of Cardiology and Cardiac Surgery” was held at the Heart Institute. The conference was organized with the active participation of the departments of cardiac surgery, X-ray endovascular, and extracorporeal technologies and functional diagnostics of the National Medical Academy for Postgraduate Education (NMAPE) named after P. Shupik.

About 100 cardiologists, therapists, cardiac surgeons, resuscitators, anesthesiologists, and functional diagnostics physicians took part in the conference. The traditional main goal of the forum is to acquaint doctors of different specialties with the latest achievements in cardiac surgery and interventional cardiology.

General Director General of the Heart Institute, Head of the Department of Cardiac Surgery, X-ray Endovascular and Extracorporeal Technologies of the NMAPE, corresponding member of the National Academy of Medical Sciences of Ukraine, Professor Borys Todurov welcomed the participants of the conference. The subjects of the plenary session included consideration of the evolutionary aspects of cardiac surgical treatment of aortal valvular disease (Borys Todurov), catheter technologies for prosthetics of aortic and mitral valves (Andrei Khokhlov, the Heart Institute), evolution of valve replacement (Vitaliy Demyanchuk, the Heart Institute), the use of blood transfusion therapy in a cardiac surgical clinic (Igor Kuzmich, the Heart Institute).
Assistant of the Department of Cardiac Surgery, X-ray Endovascular and Extracorporeal Technologies. Anatoliy Ivaniuk reported the results of his own study of the use of minimally invasive approaches in cardiac surgery. The attention of the audience was also attracted by reports on modern antithrombotic therapy after stenting of the coronary arteries (Professor Oleg Zharinov, Head of the Functional Diagnostics Department at the NMAPE) and the application of radiofrequency catheter treatment of atrial fibrillation (MD B. Kravchuk, Amosov Institute).