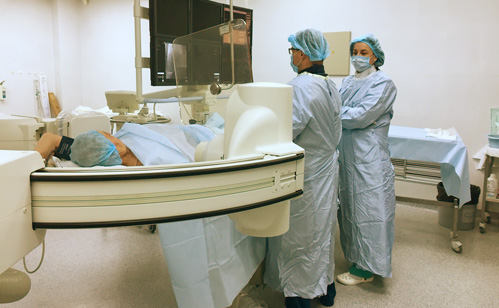 Since the beginning of 2019, more than 300 surgeries have been performed on the basis of the Departments of Anesthesiology and Intensive Therapy and the Department of Cardiosurgery, X-ray Endovascular and Extracorporeal Technologies of the National Academy of Postgraduate Education (NMAPE) named after P. Shupyk of the Heart Institute. Among them, there are a large number of unique procedures with high surgical and anaesthetic risk. One of such procedures is complete debranching with a subsequent endoprosthesis of the aneurysm of the thoracic aorta.
According to statistics, 2000 cases of aortic aneurysm are diagnosed annually in the USA. The prevalence of this disease is 5-20 cases per million population per year. In pathoanatomical studies of those who died from non-traumatic causes, aortic aneurysm is detected in 1.5% of cases. In the absence of surgical treatment, 3-month mortality of such a contingent of patients is 90%.
Introduction of the aortic endoprosthesis to the clinical practice significantly changed the concept of surgical treatment of the pathology of the thoracic aorta. Currently, the hybrid method of surgical correction of diseases of the thoracic aorta is of great interest, which is currently actively being implemented at the Heart Institute.
Positive treatment outcomes and fewer complications compared with the traditional method of surgical treatment make this approach a better choice for the treatment of patients with high surgical risk. Hybrid surgery of the thoracic aorta includes a combination of endoprosthetics and debranching of the branches of the aortic arch.
Debranching is a method of hybrid correction of aortic aneurysms, the essence of which is prior shunting (prosthetics) of the large branches of the aorta with a purpose to switch them and subsequently implant stent grafts in the aneurysmally expanded aortic department. As a result of such an intervention, the risk of ischemic complications and fatalities in comparison with open surgical procedure is minimized, due to a decrease in the time of aortic clamping, the time of artificial blood circulation and the duration of cerebral ischemia and internal organs. 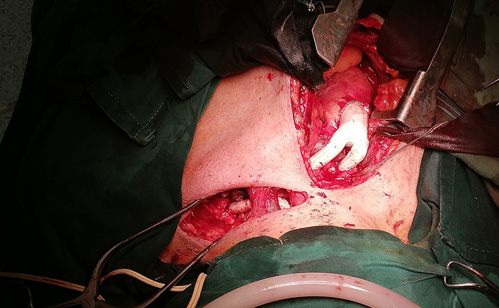 One of such operations was recently performed under the supervision of the head of the Department of Cardiac Surgery, X-ray, Endovascular and Extracorporeal Technologies of the NMAPE, MD, Professor Borys Todurov.

The operation involved two surgical and one anesthetic teams.

The anaesthetic provision of this type of surgical interventions required the application of new approaches and methods that are successfully implemented at the department, which involve simultaneous regulation of hemodynamics, cardiac activity, and cerebral blood flow.
The operation lasted about four hours. Switching to independent breathing took place after 3 hours. Currently, the patient is preparing for discharge.